Dining in Vermont is an experience all should have once in their life. The restaurants make every effort to locally source their ingredients, plan seasonal menus that support local farms, and are always reinventing themselves. Though only there for a few days, we found many gems in and around Burlington. 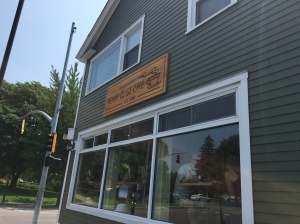 Breakfast. We are always on the lookout for a breakfast spot that inspires our palettes and makes us dream about it long after we have left. Burlington has such a place, Penny Cluse. Loved it so much we went three times in five days! Inventive food with fresh, local ingredients has never been done better. 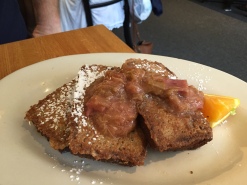 The first trip offered cornmeal french toast with rhubarb compote, and though fresh Vermont maple syrup was served, it was not even necessary. Our son went for the original french toast with bananas on top and I think it may have been the largest plate of french toast I have ever seen. By the way, the food is big at Penny Cluse, so come hungry! 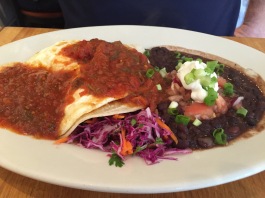 We also sampled the Huevos Verdes with a homemade avocado tomatillo salsa served atop poached eggs, spicy black beans and pickled vegetables. And, because my daughter and husband could not come to agreement, we also got the Huevos Rancheros for a sauce taste-off. 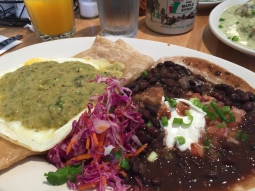 Personally, Iiked the Ranchero sauce better. It had more depth of flavor and the chili was more prominent. Both were good though, and we ended up getting one Huevos the third day with both sauces- the perfect combination! We also repeated the french toast the third day because I just couldn’t miss out on more serving.

The second visit, we went for the gingerbread pancakes, biscuits and gravy, turkey hash, and tofu scram.

The thing about Penny Cluse is that they have an amazing menu, but there is a lot of magic going on with the special board. 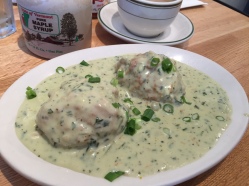 Biscuits with Herbed Gravy- and yes it was as good as southern sausage gravy!

The turkey hash, like the cornmeal french toast were both products of the special board. Another bit of advice our waitress imparted, order the bucket of spuds. You may think they are just glorified home fries, but you would be wrong, and if you ask, they will make you a half portion! 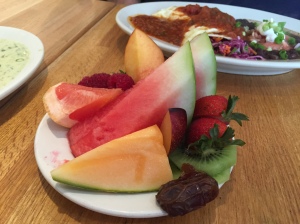 Not your usual side of fruit!

The fruit side is also unexpected. Raspberries, watermelon, peaches, grapefruit, pineapple, a date, and all of it was firm and fresh! Expect a wait because the Penny Cluse secret is out. We waited 40 minutes each day and that is about average. They have tasty coffee to stave off the hunger! If you are in Vermont, Penny Cluse is a must! 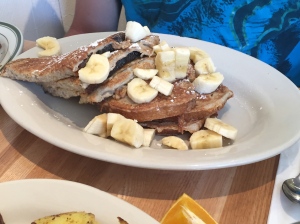 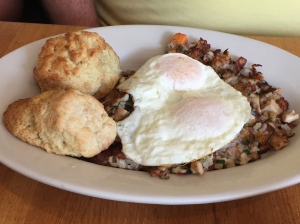 It is hard for me to make a claim about a food being “the best thing I ever ate,” but in this case it is warranted. Four words: Carrot Cake French Toast. My mouth is already watering with the memory of the utter deliciousness of it. There is more to this story though, and it centers around a trip to the SoCo district of Austin, Texas.

Always on the hunt for unique breakfast finds, we decided to try out a much touted cafe in the historic South Congress district. South Congress is a Cinderella story of revitalization. This Austin neighborhood was once seedy and crime ridden, but the city poured some money into the area and with a lot of local work, South Congress is now the epitome of what makes Austin awesome. It is eclectic, trendy and the perfect mix of old heritage and new cool. We pulled up to park in front of South Congress Cafe and there in front of us was the mecca of food trucks. I counted 8! There was everything from the totally chic Coat and Thai to the kichy silver airstream Hey Cupcake!. I kept expecting Tyler Florence to roll up with his Great American Food Truck Race. 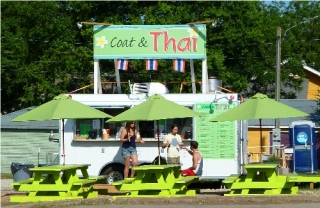 We resisted our urge to give these trucks a whirl in favor of sticking to the original plan, breakfast at South Congress Cafe. Upon entering the Austin vibe made itself readily apparent. The decor was a trendy mix of old and new. The ceiling boasted exposed ductwork moving down to exposed brick and stone walls. The seating was sleek leather booths and mod sets of tables of chairs in white and stainless. All of this was set off with judicious pops of orange sprinkled around the cafe. There were orange pendant lights, orange basket shades and vases and a bar rimmed in orange. Setting off all of this understated elegance was an open glass wall between the dining room and the kitchen. I love being able to see all of the action; it not only inspires confidence in the food preparation, but it also gives diners a good view of what is available. It was visually fun and inviting. The staff was friendly and quick. We were shown to a table immediately. We were fortunate because as we ordered our french press of coffee, the crowds started pouring in. This is definitely a popular lunch spot; we had arrived at that perfect moment between breakfast and dinner rushes.
Our waiter was very relaxed, maybe a little too relaxed for our taste but a trend in Austin service. As usual, we asked him for his recommendations from the menu. He strongly suggested we try the carrot cake french toast and even offered to serve it as a side item if we had our hearts set on something else more Tex-Mex. This was a wise suggestion and we took him up on it. I was pretty curious about a carrot cake french toast and now apparently I could have my cake and brisket too! We ordered the Smoked Brisket Hash and Eggs with a sampler of house made salsas and a Crabcake Benedict with Chipotle Hollandaise. I normally would have ordered the Migas to try the hometown specialty, but the benedict was served with a hunk of spinach and prosciutto quiche in place of the normal poached egg. That was too interesting to pass up.
We were just beginning to enjoy our french press of coffee, which is totally the way to go if you like coffee, when the unassuming single slice of carrot cake french toast arrived. SoCo Cafe serves it with a pecan praline cream cheese concoction that they call syrup. It is a dish of thick, delicious gooeyness that should be slathered all over that toast. It is that good. The toast had nice visible slivers of fresh carrot when I cut into it. The texture was a juxtaposition of crisp griddle outside and uber-moist, dense inside. It tasted like carrot cake, it tasted like smoky french toast, it tasted like the best thing I ever ate. I wasn’t really sure what they could possibly follow that up with, but they did not disappoint.
Next came the Smoked Brisket Hash and Eggs. I am generally dubious about restaurants knowing how to poach and egg perfectly, but they did. We busted open the eggs and let the juice run all over the hash. Yum! The brisket was tender and had the right level of smoke. The hash was extraordinary. It had ribbons of cabbage, onions, crisp corn, tender potatoes and poblano peppers. The salsas were all on the spicy side and the perfect accompaniment to the hash. The waiter had alluded to the idea that the crabcakes for the benedict were the best in the city, and he may have been right. I did not sample them anywhere else, but these were quite good. They were dense with lump crab and diced shrimp and coated in a light panko They weren’t bready like sometimes crabcakes are. The quiche topping was genius. It was a thick hunk of spinach and prosciutto crustless quiche nestled atop the crabcake and smothered in a spicy chipotle hollandaise. The kicker was the flash fried prosciutto strings on the top.
Needless to say, we could not finish everything, try as we might and we did try! The meal was superb. I loved everything from start to finish, but I am still haunted by that french toast. This cafe is a find on many levels from the individually dressed servers (no uniforms) to the chic interior to the friendly service to the fabulous food to the bohemian vibe. It is a true Austin experience and reminded my husband and I both of one of our other favorites, South City Kitchen in Atlanta. This will be a definite every time I come to Austin and it doesn’t hurt that right next door is one of those fabulous independent book shops that seem to be disappearing from our landscape. Next time, I will plan a whole day in Historic South Congress to sample all it has to offer!